I’m excited to have FEY MATTER be a part of this 60+ book and eReader giveaway! The contest is open until July 8th! 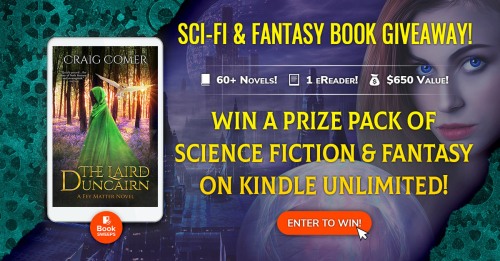 New Cover for THE LAIRD OF DUNCAIRN

With the upcoming release of Book 3 of A Fey Matter, City Owl Press is revising the cover for THE LAIRD OF DUNCAIRN! The new cover ties in the series, so that all the books will have the same look and feel. I’m very excited about this, and I’m looking forward to revealing the Book 3 cover soon! 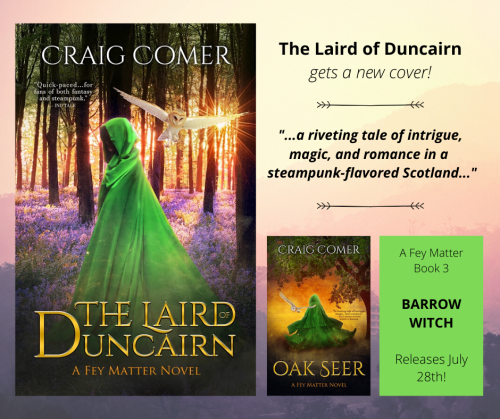 Get The Roads to Baldairn Motte FREE from Kindle Unlimited! 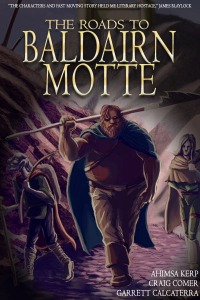 The new edition of THE ROADS TO BALDAIRN MOTTE is now available, and you can read it free on Kindle Unlimited. Happy to see this fun project out in the world once again!

3 novellas, each by a different author, telling a different version of the same bloody conflict.

Cheers to Garrett Calcaterra and Ahimsa Kerp for making this happen!

Find it here on Amazon.

Posted in Status Updates, The Roads to Baldairn Motte

Greetings! I’m thrilled to announce OAK SEER, book II of the Fey Matter Gaslamp fantasy series that started with THE LAIRD OF DUNCAIRN, is now for sale!

In this second installment, Effie must overcome her fears as she’s thrust once more into the spotlight–seen as a hero by some and a traitor to fey-kind by others. And if greedy lords and scheming politicians weren’t enough, a madman is on the loose killing fey without regard, while blood-thirsty cults and armed mobs prowl the city streets. 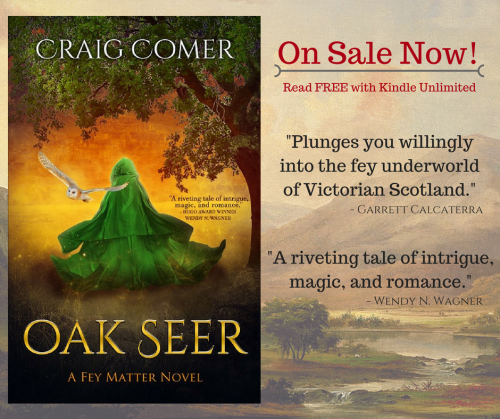 AN EXCERPT FROM CHAPTER ONE

Effie peered through the window of the steam carriage as the village of Langmire came into view. The buildings—crofters’ homes mostly—sagged like slump-backed crones. Grey smoke wafted from blackened chimneys sprouting from thatched roofs. Someone baked fresh bread. She caught it on the wind beneath a perfume of moldy timbers, damp leaves, and rusting iron, all remnants of the heavy spring rains that had flooded the River Teith and left the roads full of boggy ruts and bared stone.

Eager for a warm hearth and a cup of honeyed tea, she licked her parched lips. She’d travelled a full day to reach the village. She’d come because Conall Murray had begged her, because without her an innocent woman would hang.

The thought drew her attention to the heart of the village where a stout oak grew. Muckle Ben, the locals called it, Effie had once heard. They’d carved a Green Man into its bark long ago, during a time when such things held power. Now banners pronouncing some celebration hung from its limbs more often than not, but none remained there currently. Its trunk stood as somber as an undertaker. Chickens picked at worms in the upturned soil near its roots, and a lone hound howled at the rustling leaves as the branches creaked above.

Fergus Alpin hacked into his handkerchief, a wet, miserable noise she’d had to contend with the entire journey from Stirling. The Fey Finder sat across from her in the steam carriage’s tight compartment. His wrinkled face was spotted and thin, and he kept tugging his coat tighter about his frail bones. She tried to avoid his gaze, but nothing adorned the compartment for her to study, and she could only stare out the window for so long before feeling rude.

“I’ll do the speaking,” the man said. “You will remain silent.” The quiver at his lip turned into another fit of hacking, yet she still heard his mumbling. “Send a fey to catch a fey, and one with paps at that!”

The steam carriage rocked and bounced, splashing through the muddy road as if fording a stony riverbed. Effie braced herself against the hard, worn benches, the padding flattened from years of service. A lightly stained wood paneling formed the carriage’s walls, floor, and roof. The boiler at its rear warmed the compartment, but at the expense of the coal smoke that clouded the air.

She shifted to relieve her sore hips. Her eyes narrowed. “The Fey Finder General bade me accompany you, Mr. Alpin, and not so I would stand and do nothing.” She tried to keep the bite from her tongue.

Of Fey Finders, Alpin was a journeyman and not a zealot. At least there was that. He sought not to be bothered rather than possessing the fiery hatred common to his profession.

She pressed her palms into the cushion on either side of her, to steady herself. It still marveled her she could sit so close to a Sniffer, a man the crown tasked with hunting down malevolent fey. Malevolent, as if they knew what the word meant. They hunted all with fey blood, and as a Sithling—one with the ancient blood of the Daoine Sith coursing through her—that included her. But things had changed after Caldwell House, and she had a need to trust where once she dared not. The fierce battle there had forced the lords of the empire to open their eyes. They could not rest on centuries of intolerance any longer. They had to welcome the fey into society’s ranks and accept a permanent treaty. They had witnessed the fate awaiting them if they did not.

Effie’s heart warmed. If the lords of the empire could learn to trust, so could she, and perhaps the Scottish fey would live freely for the first time in millennia.

Alpin’s jaw worked. He’d likely never had someone with paps stand up to him. Most Scots of either gender avoided Sniffers as if they carried the plague. “Look here, Miss Effie,” he snapped. “I’ll not have it. You may dine with the likes of lords, but you’re not in some grand procession here. I know the hearts of these gentle folk better than you ever will, and I will not banter with the mind of a devious hag.”

“When you see one, I’m sure,” said Effie, not knowing whether the man had meant her or the poor Spae Wife they’d come to question.

More Reviews for The Laird of Duncairn 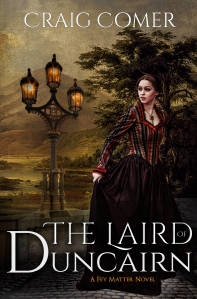 Here are a couple more reviews posted around the inter-web in the past week:

Suspenseful, intriguing and captivating plot with a great prose and a knack for engaging the reader. The book was a one sit read for me. I loved it and would recommend it to everyone. The characters were well developed and deep with an original story.

I really enjoyed this book! Great plot, exciting suspense, and the danger of getting caught around every corner! Definitely recommend to anyone considering this book, or any fans of the genre!

Also, here’s a link to an interview I did with The Qwillery. In it, I talk about plotting, pantsing, and my writing influences.

The Laird of Duncairn e-book $.99 for a Limited Time!

THE LAIRD OF DUNCAIRN is now available in print and e-book, and to celebrate, the e-book is on sale for $.99!

Also, today kicks off a month of guest posts, interviews, and reviews. Here’s a list of some of those places from I Heart Reading. 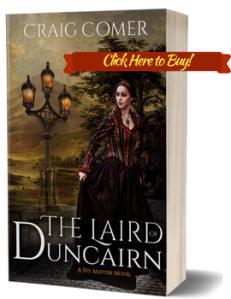 Read an excerpt from the book!  #TEAMCITYOWL

Book Launch – The Countdown is On!

THE LAIRD OF DUNCAIRN launches in 4 days, and I now have my author copies in hand! Thanks to Tina, Yelena, Heather, and all the City Owl authors for their support!

The book is available for pre-order and has already received some great reviews!

“Excellent story-telling and well-rounded characters makes this a thoroughly enchanting tale… I was particularly enthralled by both the geography and the period, both incredibly well researched and invoked. Loved this, couldn’t put it down.”  – Goodreads Review 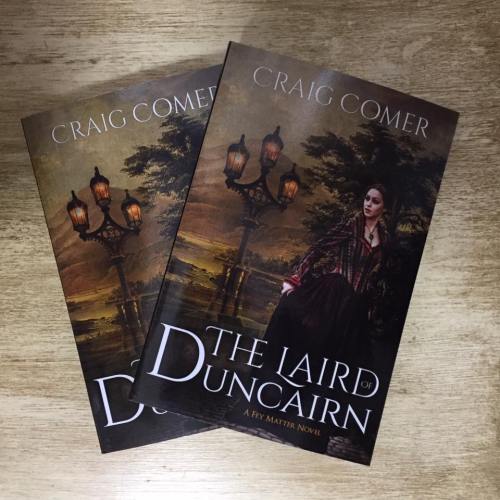 Posted in A Fey Matter

The Laird of Duncairn – Cover Reveal!

I am happy to reveal the cover of my forthcoming novel, THE LAIRD OF DUNCAIRN! (available in print May 2nd and eBook May 16th) Here’s a bit about its origins, from an interview on the City Owl Press website:

THE LAIRD OF DUNCAIRN is set in Scotland, where I lived and studied history at University for a year. Having a chance to roam throughout the Highlands and live in an old, storied city such as Edinburgh was truly amazing. With its breathtaking glens and lochs, it’s easy to see why the country is often used for romantic settings.

But I didn’t set out to write a novel set in Scotland. I started with a character, a young orphaned girl who suffered at the hands of politicians hundreds of miles away. That situation reminded me of Scotland’s history with London, and the tale grew from there. The girl became half fey, part of a dying race oppressed by centuries of scathing propaganda.

Added in were creatures out of folklore, real-life historical figures, and, of course, crank-guns and dirigibles. Adventure and mystery sweep across the countryside in THE LAIRD OF DUNCAIRN, as auld creatures awaken and new discoveries are made that will rock civilization to its core.

Thanks to everyone involved! More exciting stuff to come!

Posted in A Fey Matter