Amazon has selected THE LAIRD OF DUNCAIRN to be a featured Kindle Deal for the month of November. All month, the book will be $1.99. It’s not too early to buy some virtual stocking stuffers!

The rough draft of the first Harvest Falls mystery is almost complete! Only a few chapters to go–you know, the ones where our intrepid detective, Charlie Henry, unravels the last clue and the killer is, at last, revealed. Next, I’ll be using some elbow grease to polish up the draft, rip out some bits that didn’t quite work, and salt in some flavor in a few sections that need it!

I’m also working on the Jack Canonbie novella, spinning some things around in the plot, and putting some pretty big obstacles in Jack’s path–not that he isn’t good at creating those on his own! This version of young Jack finds him trying to bully his way through life only to find that might doesn’t always make right.

Thank you! Now, what’s Next?

Thank you to everyone who helped welcome BARROW WITCH into the world! I hope you enjoyed the book. Please let me know your thoughts by posting a comment or by leaving a review on Amazon.

So, what’s next you ask? Some exciting stuff!

I’m working on a novella featuring a young Jack Canonbie. Jack was such a favorite of mine to write, I’d love to give him more room to knock some heads!

And that’s not all. I’m also working on a new mystery series that will be a departure from the gaslamp world of A Fey Matter. The series is dubbed Harvest Falls for now, and will have murder and secrets and tangled webs aplenty, all set in the Pacific Northwest. I’m about halfway through an initial draft of the first book. The killer is lurking, but salty and sweet Charlie Henry is hot on their tail!

More to come on both! 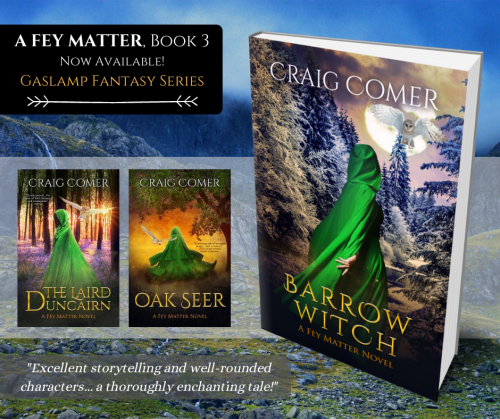 It’s out! Book 3 of A Fey Matter released today; you can find it on Amazon and everywhere you get your reads!

“In BARROW WITCH, the stakes are steeper, the danger more dreadful, and Effie is more exciting than ever. Comer concludes his trilogy with flourishing aplomb… It’s quite the accomplishment for each book in a series to improve, but with BARROW WITCH we reach the ultimate high of fey steampunk fantasy that the series has always delivered.”
– Ahimsa Kerp, author of Empire of the Undead

Praise for THE LAIRD OF DUNCAIRN:

“Effie is an amazing character. I loved following her journey and seeing her change and grow.”
– I Heart Reading

“The book was a one sit read for me. I loved it and would recommend it to everyone. The characters were well developed and deep with an original story.”
– Read Day and Night Blog

“Well-developed characters and plot make this historical fantasy a true pleasure to read and become lost in… A very unique and fascinating story.”
– Cecily Wolfe, author of Throne of Grace

Find the series on Amazon; Download it from Kindle Unlimited!

I hope you’ll enjoy these views of Edinburgh & Glasgow, and the Borders abbeys of Melrose, Jedburgh, & Kelso. Each shaped Effie’s adventures in their own way, but to find out how, you will need to read on!

Hear anyone say, “Scotland,” and almost instantly images of the Highlands come to mind. And for good reason. They are spectacular in ways that my photography skills cannot nearly do justice.

Here are a few images of the places that inspired my imagination, including some of Effie’s Glen Coe!

A trip to Edinburgh can’t be had without recognizing the amazing amount of influential writers who have lived within the city over the past 500 years. There is even a Writers’ Museum dedicated to some of its most famous inhabitants… not to mention the monuments and statues!

Sir Walter Scott’s influence on Scottish culture is hard to deny, and his home of Abbotsford is filled with the rich history of the man’s life. His books are everywhere in Edinburgh. The Scott Monument dominates Princes Street.

Robert Louis Stevenson’s childhood house on Heriot Row features quite a bit in A Fey Matter. After all, it is the home of Thomas Stevenson. But did you know that you can not only walk to it, but lodge in it as well? It’s a hotel and hosts private events!

Kenneth Grahame’s house is also now a hotel. I’ve enjoyed staying here a couple of times, and can recommend it. Its views of Edinburgh Castle and location can’t be beat!

For J.K. Rowling fans, check out The Elephant House cafe, where reportedly a large part of the first Harry Potter book was written. It has a long history of writers finding inspiration at its tables, and the views of the castle are spectacular! 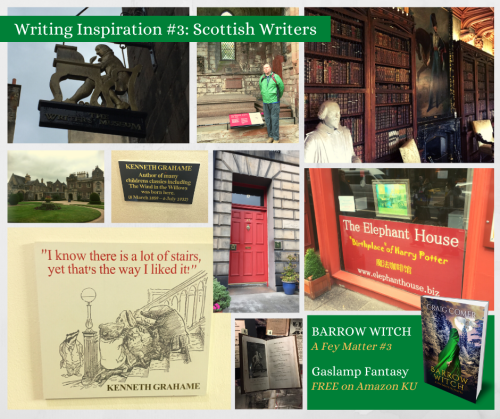 The Scottish Borders region is rife with history, and several of the places I’ve visited made it into BARROW WITCH, although not always in their original form. Without spoilers, here are:

Hope you enjoy reading about these tidbits as much as I did weaving them into Effie’s adventures! 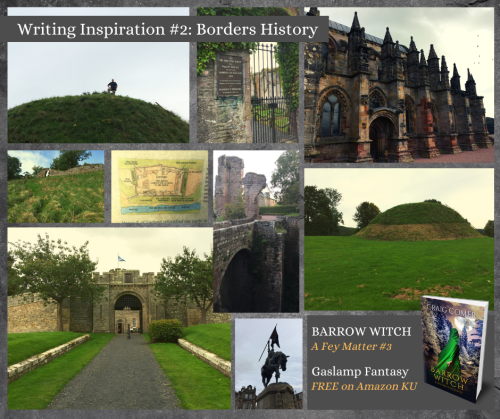 BARROW WITCH, book 3 of my Gaslamp Fantasy series, A Fey Matter, is now available for pre-order! In order to celebrate, I thought I’d share a little bit about the inspiration for the book.

A couple years ago, my wife and I walked the Borders Abbeys Way. Well, most of it…in parts. The point is, we walked a lot for several days! Along the way, we not only saw beautiful scenery, we explored the region’s incredible past, enjoyed its rich culture, and found quite a few spots that made it into the pages of BARROW WITCH. Here is a sampling!

Can you spot the tree where Thomas the Rhymer met the Queen of Elfland? 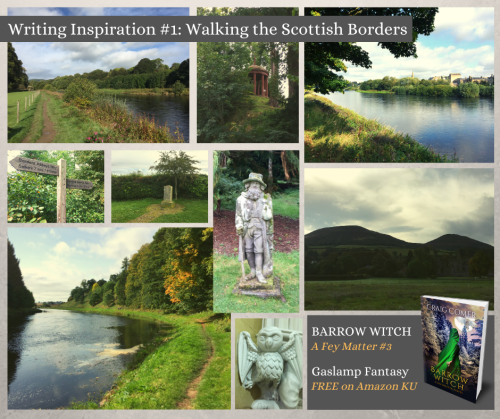 You can pre-order BARROW WITCH on Amazon! It comes out July 28th!